Hat Camp was a resounding success and the largest gathering of milliners and hatters that I have attended to date! It was really exciting to be surrounded by so many people that share the same passion. It was held at the end of September near Seattle on Vashon Island at Camp Burton, a quaint retreat center right along the water’s edge. I heard about last year’s Hat Camp in Los Angeles and was really keen to join this year to meet milliners from all over the U.S. and Canada.

Hat Camp began in 2005 as a way for a group of west coast milliners to meet up and share ideas. It has moved up and down the west coast over the years and has grown in size. Over 60 milliners and hatters from the U.S. and Canada participated this year and the networking opportunities were truly the highlight for me.

I arrived in Seattle on Thursday morning, September 26th, picked up my car rental, and headed straight to the ferry. I was pleased to meet my first fellow attendee onboard, Afia. She showed me some of her fun hats and supplies which started to build excitement for the weekend. But it was a very short ferry ride and soon we had already arrived at Vashon and were off to Camp Burton! 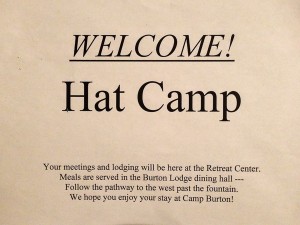 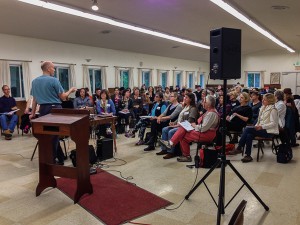 After lunch, Wayne Wichern welcomed us and kicked off the weekend with a group brainstorming session about different topics people were interested in addressing at Hat Camp. There was a rough agenda for the weekend, but there was plenty of time and opportunity to customize according to people’s interests. I really liked this aspect of Hat Camp. It made for a more inviting weekend. There weren’t “teachers” and “students,” rather we were all there to teach and learn from each other.

Hat Camp was largely discussion-based with a few demonstrations throughout the weekend. There was really only one session that was hands on — indigo dyeing, but more on that later. The entire first day was spent in discussion, from fashion trends to business models. It was a good way to ease into the weekend.

Friday was chock full of discussion, demonstrations, presentations, and a materials swap meet. We covered working with feathers, dyeing feathers with cake dyes or koolaid, repairing and altering blocks, attaching petersham with a special binder foot, hatting, and so much more! 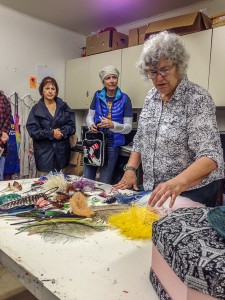 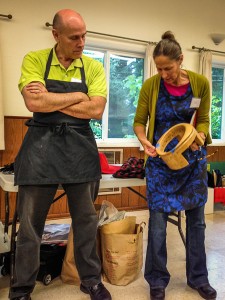 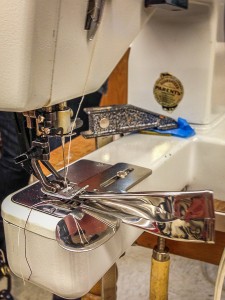 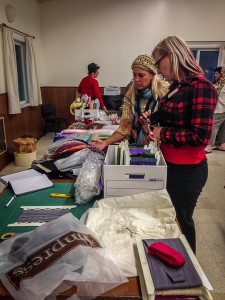 One of my personal highlights was indigo dyeing. Jean Hicks set up an indigo dye pot and gave us an introductory lesson to this plant-based dye. I had never dyed with indigo before. I knew there would be dyeing at Hat Camp so I had brought some vintage Swiss and Italian straw hoods to dye. The hoods were baby pink, a color I don’t care for, so anything would be better! I was pleasantly surprised to find out that we would be working with indigo. Jean shared some sample pieces that she had dyed and gave us an overview of the process. It’s quite a finicky dye as the indigo needs to be reduced (a bit of chemistry going on here!) to dissolve into solution. For the indigo to remain reduced, you must not introduce any oxygen into the dye pot so that means stirring slowly, submerging your material slowly, etc. I saw how this type of dyeing could be a very meditative process. Once the material is removed from the dye pot, it starts to oxidize. Despite being a chemist, it really did feel like magic. Initially the material is a bright lime green and gradually it oxidizes to beautiful indigo blue. It was great fun seeing all the different materials that were dyed. They all take up the dye a little differently and the material’s starting color makes a difference too. 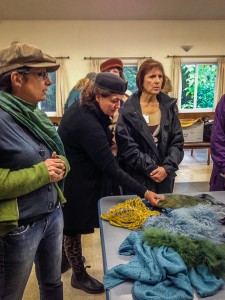 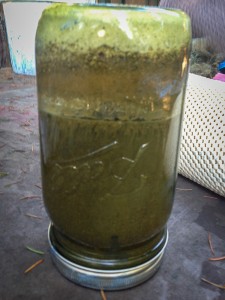 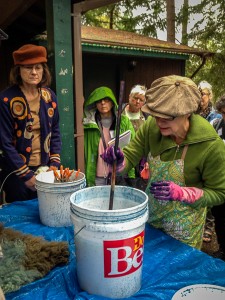 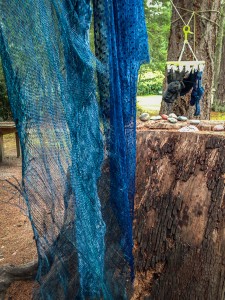 Saturday was largely more discussion with topics like working with leather or fur and distressing techniques. In the afternoon we had a tour of Bergamot Studio on Vashon. They design fabrics and print the designs on all kinds of fabrics using wide format printers. As a photographer with a very nice printer of my own, this opened my mind to all kinds of new ideas. Imagine taking my own photos, printing them on fabric, and using the fabric to create (hats or otherwise). Genius! And talk about bringing many of my passions together. Stay tuned as I delve deeper into these possibilities. 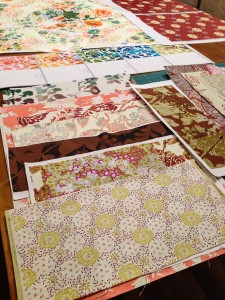 Unfortunately it was raining most of the time that I was at Hat Camp (surprise!), so I didn’t have any opportunities to take nice photos of the property or Puget Sound. But nature was abundant, including a family of deer that was hanging around all weekend. 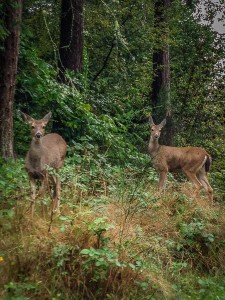 As with everyone else, I tip my hat to Wayne Wichern for being the driving force behind this year’s Hat Camp and thanks also to Jean Hicks and Daria Wheatley, the rest of the Hat Camp Steering Committee. All of your hard work does not go unnoticed and I look forward to seeing everyone at the next Hat Camp! 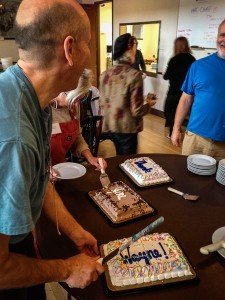